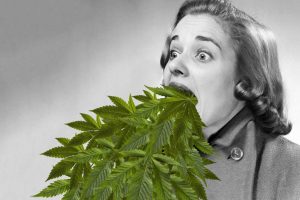 Most of us have hot boxed a car back in the day, but can a woman hot box her vaginal box? Let’s face it; two of the greatest things in life are marijuana and woman private part. Both are good for a rainy day. Both help turn a frown upside down. And just as chocolate and peanut butter are great and go together to form all kinds of delicious magic, can women private part and pot be combined for a good Friday night? The next time you buy a smoking pipe from your favorite smoking pipes retailer, and you want to experiment in the bedroom, you may ponder the safety issues in having your partner take a big toke and blow smoke right up into her pink fortress. So, is it safe?  Yes! It’s Safe Ladies!  According to medical professionals, blowing marijuana smoke into a woman’s vagina won’t cause any physical damage. In fact, natural and holistic medical centers, as well as Chinese medical specialists, use a process called vaginal steaming in which herbs are extricated through steam that is sucked right up into your private parts. According to ‘Natural News’ the best way to steam your snatch is to: “[…] Boil as little or as much filtered water as you like; typically, women use about 8 cups and then once the water has boiled and has cooled enough where it is no longer boiling, add about 2/3rd of a cup of your fresh and/or dried herbs. Do not add them while the water is still boiling as this can lessen the potency of the herbs. After the herbs have steeped for about 10 minutes, pour half of the contents in a bowl and proceed to squat over it or sit on a vagina-stool (a stool with an opening in it). To maximize the steam, have a large towel or blanket that wraps around your waist, making a tent around the bowl and allowing the steam to go up into the vaginal opening”. (Source from Natural News) Some of the more common herbs used to smoke out the veejay include basil, mug wort, marshmallow root, wormwood, calendar, rosemary, and oregano. If your partner plans on giving head after you steam your vertical smile with oregano, you may want to serve him or her Italian food for dinner prior to tasting your fur burger. But why steam your clam with stuff you put on your spaghetti when you can buy an affordable glass smoking pipe to pack with all natural organic ganja and smoke out your blunt with a little green hooch? Why Use a Little Blunt in Your…women private part?  According to some pot users, marijuana in the vagina can make you high and the practice is especially recommended for women who have asthma and can’t smoke orally. Forma, a company that makes vaginal lube from cannabis extract has customers who ask a lot of questions before trying their product, and these are the same questions women ask themselves before they allow their vagina to get stoned with smoke. One Forma customer (whose questions resonate with our own clients) asked herself, “I had a lot of thoughts running through my head about what it would be like [using marijuana in the vagina]. Is it going to be a high that’s similar to smoking weed? I love smoking weed. Or will it be more of a body high, like when you eat pot brownies? Oh shit, am I going to trip balls? Maybe I shouldn’t do this on a Tuesday. I wonder if I’ll be easier to orgasm when I’m having sex if my vagina is stoned? Ooh, I wonder if my orgasms will be more powerful too. That would be awesome. Indeed some women have reported that the benefits of having marijuana smoke blown into their vagina includes:

Most women report that it takes 30 minutes to feel the stoned effect in their private parts  . Once the feeling hits they convey their Poona feels relaxed, yet more sensitive and enlightened by its needs and wants. If you ask your partner to blow marijuana smoke into your lady parts, your vagina might feel like it is skipping and flying a kite along the beach, or it might feel like it is being blessed by thousands of little angel kisses and hugs

“A pipe is to the troubled soul what caresses of a mother are for her suffering child.”
-Indian Proverb”