Click to slide down Menu Panel
Home > Articles > Is it okay to get your bunny high on weed?

Is it okay to get your bunny high on weed? 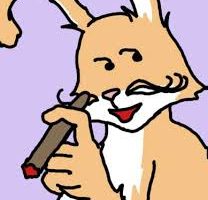 Is it Okay to Get Your Bunny High on Weed ?

Silly rabbit, pot is for people 21 and over who have a medicinal card or who live in states where the plant is legalized, right? Well it seems the rabbits in Utah are tripping balls from eating marijuana plants, so the next time you reach for your smoking pipe to enjoy some herb, you may want to share some green with Peter Cotton Tail and get the little guy all messed up. Here is a fact: rabbits LOVE marijuana—a truth that was revealed in international news early last March when a pathetic anti-marijuana movement spearheaded by Utah DEA agent Matt Fairbanks argued that legalizing marijuana in Utah would lead to rabbits getting stoned An article by The Guardian reports that “stoned rabbits are the anti-marijuana movement’s weakest ploy yet”, and calls the DEA’s argument “half-baked”. According to Agent Fairbanks he found a rabbit stoned and rolling around at a grow site where the pothead bunny had consumed an unknown amount of the plant. Fairbanks testified to the account stating, “One of them refused to leave us, and we took all the marijuana around him, but his natural instincts to run were somehow gone”. What is even more amusing is that Fairbanks assumed to know the rabbit was suffering. Sounds like the bunny had as much fun as you could have with a glass smoking pipe and some Mary Jane, especially on Easter when the stress of dealing with out-of-town visitors coming to talk about 6 foot rabbits delivering baskets of colored eggs is too much to bare. Time for some reefer, me thinks. Easter and marijuana together? Blaze the Lord!  So How Much Weed can the Easter Bunny Handle?                                          In a medical marijuana study researchers used a THC treatment for rabbits with various illnesses. They were treated subcutaneously for 13 days with doses up to 100 mg/kg a day with no significant toxicity except for anorexia and some local dermal inflammation. This would be the equivalent of a 200 pound man injecting 9.9 grams of pure THC into his system or smoking 4.6 ounces! That said, it is safe to say you can feed your bunny pot leaves or blow smoke into his cute little face and get him all messed up with ease knowing he won’t die. Why is it a Good Idea to get High on Easter? If you love Easter and you want to enjoy it without being under the influence of weed, then by all means proceed with your day. But many people have issues with Easter, and rely on pot to get through the day. Here are some common challenges poor Christian people face who dislike Easter: